Watch End of the Road on iTunes

End of the Road, the Scottish Bafta-nominated feature documentary from Swift Films’ director Richard Nicholls is now available to view on iTunes.

The film, which premiered at the New York City International Film Festival, tells the story of two of London’s brightest young stand-up comics, Alexis Dubus and Sy Thomas as they embark on an epic journey of friendship and self-discovery. Ridiculed by their friends for not having an ounce of common sense or resilience between them, Sy and Alexis are desperate to prove their doubters wrong.

After purchasing a second-hand car for £100 the pair embark on a fraught and highly eventful 4000 mile journey across seven different countries and a stretch of the Western Sahara Desert. But with no knowledge of car mechanics, they must rely on their charm and strength in adversity to have any chance of arriving at their destination in The Gambia. If successful in reaching their goal, their car (or what’s left of it) will be auctioned off for local charities.

Offering a rare insight into the people, places and culture of Western Africa, the film is a very intimate portrait of two engaging characters whose spirit of adventure and infectious enthusiasm far outweighs any fear of failure. Descending into some of the most inhospitable terrain known to man, every pitfall, pothole and breakdown is closely observed, both mechanical and human.

The film can also be bought on DVD and is released region free and includes out-takes and deleted scenes. 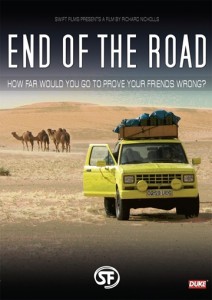