At the end of May, we had the opportunity to film some of the best street dancers in the world while working with a fantastic crew.

‘B-Town’ was a free outdoor event premiered by International Dance Festival Birmingham in Victoria Square as one of their flagship shows. It showcased a series of choreographed street dances, featuring World B-Boy Champions ‘Morning of Owl’ from South Korea, an all star line-up from Funkstylerz UK collective by ProDance and a troupe of talented community performers. Swift Films was commissioned to capture several performances on camera throughout the festival, producing full-length films of premieres – including ‘Concert Dansé’ at Symphony Hall – and creating a festival showreel for stakeholders. A substantial part of the project was also to film ‘B-Town’ each evening during its run and broadcast it live onto a big screen. This we were able to achieve with four live camera operators, a live vision mixer/director and a cosy Outside Broadcast Van. 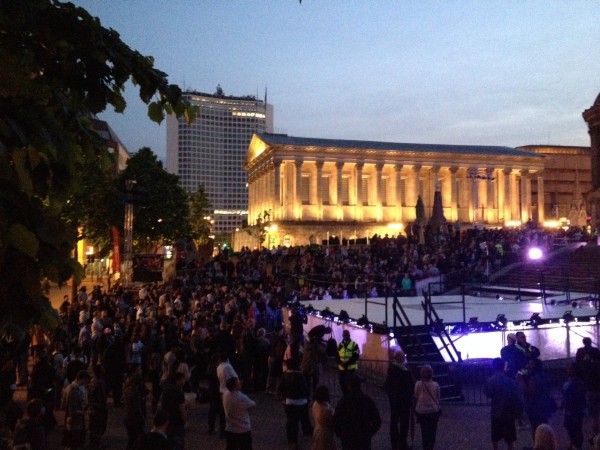 Being cosy was of course not the OB van’s main purpose, but we were very grateful for it. The narrative of B-Town features a fictional queen of Birmingham, who saves the city from devastating floods by putting up defences. She decides to allow refugees from across the UK to escape this catastrophic weather event by making the city their home. So the irony was not lost on us, that for the most part of that week the heavens emptied themselves on the city. The dancers performed some pretty hair-raising stunts, spinning at unbelievable speeds on their heads, seeming to defy gravity by balancing on a palm, and leaping feet into the air from standing. So any hint of moisture on the stage meant the show could not go on. But thanks to the sheer determination of the stage production crew to re-lay the stage surface and towel dry by hand any wet patches, the show was only cancelled for one evening out of the four. 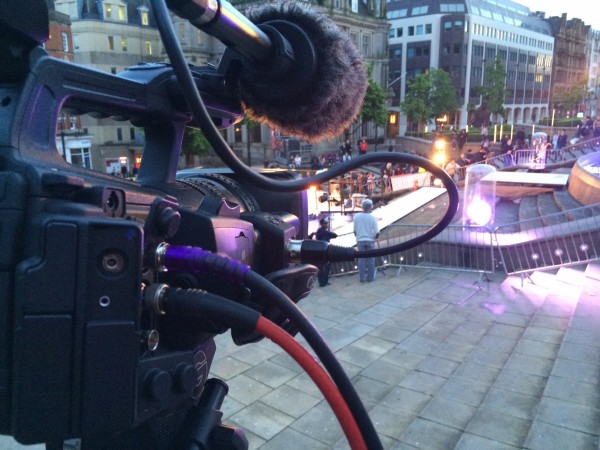 The stage was constructed over the huge fountain in the centre of Birmingham’s Victoria Square, with a main dance area at the front and two smaller performance spaces at the back. Steps on either side of the fountain lead down to a flat area and give rise on either side to a number of plinths and raised flowers beds. The location lends itself well to a multi-camera shoot with a number of natural vantage points. We positioned one camera right at the front of the stage, which at its tightest zoom captured the intricacies of the dance moves and at its widest took in the whole of the stage and Square. Two cameras were positioned and cordoned off stage left, making use of raised plinths at the perimeter of the Square behind the audience. A fourth camera was positioned at a similar height at stage right. We also positioned Go Pro cameras on the stage; these captured some incredible angles without getting in the way of the action. The feed from our cameras was vision mixed live and broadcast onto a 20 metre square screen positioned close to the stage. 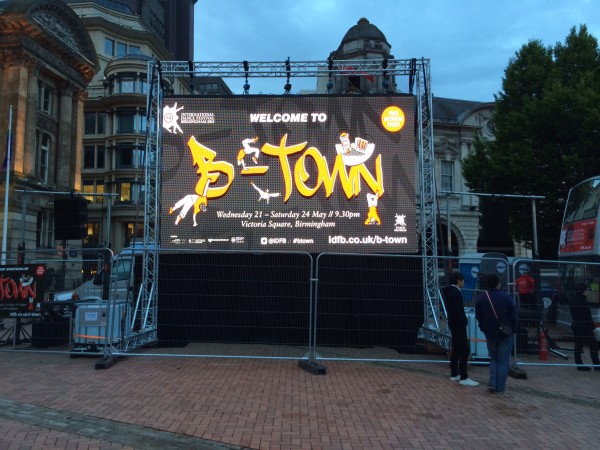 During the day following the first performance, we edited together a version of the live show using the live feed taken from the Outside Broadcast facility and the footage from our Go Pro cameras. We topped and tailed the film with International Dance Festival Birmingham’s ‘B-Town’ graphics and credits. So when the second night’s show was called off at the last minute, the audience was able to watch the show on the big screen just metres away from the main stage. The occasion felt (nearly) as magical as the real deal and the audience went away having still seen a thrilling dance spectacular. Plus the shrieks of delight as the community dancers recognised themselves on the big screen were heart-warming, even despite the drizzle.

With the wet weather contingency being put into action on the second evening, we filmed and broadcast three performances live. The last show was not just the dancers’ grand finale, but ours too. On Saturday 24th May we were able to stream the full performance live onto International Dance Festival Birmingham’s website, reaching audiences as far afield as South Korea and Peru.

The experience certainly gave us some memories we won’t forget. The live performance of B-Town can be seen below.