Simon Osborne from Sea Kayaking Cornwall approached us recently to let us know about his quest to become the first person in the world to attempt a solo circumnavigation of Madagascar in the Indian Ocean by kayak.

Simon`s brother Mark died from Leukaemia aged 13. Just before he died, Simon promised him that he would one day raise money for Leukaemia research in his memory. In 2002 Simon became the youngest person to circumnavigate Great Britain by kayak. Following on from the success of this expedition, he embarked on a gruelling solo circumnavigation of Ireland again raising money for Leukaemia research. The 1800km journey pushed him to the edge both physically and mentally but he managed to raise over £30,000 for charity.

The next chapter in Simon’s story was to attempt what no one had dared try before; to become the first person to circumnavigate Madagascar by kayak. It would be a journey of over 3000 miles.

Armed with an on-board bullet camera rigged to his kayak and a small HD camera we provided him with, Simon headed out to Madagascar to shoot a first-person documentary about his epic journey. Encountering monsoon rains, explosive surf, sunburn, tropical illness and battling a punishing schedule, things didn’t quite go to plan, but the story of Simon’s incredible journey makes riveting viewing. Swift Films helped Simon with producing his film and took care of all post-production.

The documentary – featuring the film of Simon’s successful solo circumnavigation of Ireland by kayak – is available to buy from the Sea Kayaking Cornwall website.

£2 from the sale of every DVD goes towards Leukaemia research. 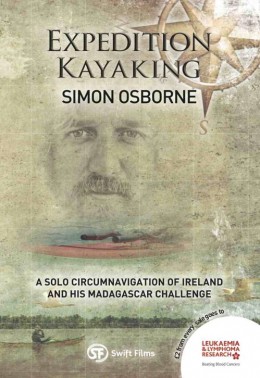