Swift Films has had a busy December providing editing services to a one-off BBC documentary called The Battle for Stokes Croft:

In April 2011 rioting returned to the streets of Bristol. This time, the trouble was focussed on Stokes Croft, one of Britain’s most colourful urban communities. A new branch of supermarket store Tesco which had been opposed by many local residents found itself at the centre of the disturbance. In the months since the violence, some local campaigners have continued to oppose the presence of this store. Their belief is that giant corporations will destroy the character of Stokes Croft and force small independent businesses to close down.

The one-off documentary profiles a group of residents who are trying to offer an alternative to the supermarket, selling locally sourced foods. But can they really compete with the corporate muscle of the supermarket giant? 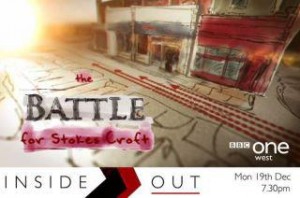